How to Get to Kuang Si Falls in Laos

The Best Hotel for Business Travelers in Seattle

The Best Wedding Destination In The World

Yesterday was an absolute fairy tale! I’m having trouble typing this caption out because I’m at a loss of words for how to convey the magic of what @alexandra_carson and I experienced yesterday here @fsborabora. I have never really had dreams of what my wedding would be like, but if I had, this would have exceeded every single one of my expectations. Our wedding would have been incredible no matter what venue we chose, but being able to marry my best friend and the love of my life on a miniature island in Bora Bora was just out of this world. In my opinion, @fsborabora is without question the best wedding destination on earth. 🌎 #thewildgallaghers Thank you to Damien @boraboraphotographer for capturing this moment. I’m so excited to share more of your incredibly photos with our friends and family.

Obviously, this destination is not for everyone. If you want a church wedding or a wedding with 400 of your friends, this isn’t for you. If you’re not fond of beaches and don’t want to get married on an island, this is also not for you. However, if you’re looking for a destination wedding and you want to get married to your partner either alone or with a small group of family and friends, Four Seasons Bora Bora is the best wedding destination on earth.

The natural beauty in Bora Bora rivals, and likely surpasses any destination any in the world. We have been saying the island looks like someone turned the vibrance up on everything. The water is a shade of blue we have never seen. The trees and mountains are a green we only thought was possible to create in Lightroom. And all of this is contrasted by sand so white it looks like someone stripped all of the saturation out of it. In other words, Bora Bora defines #NoFilter.

We want to provide you all more detail than simply touting the beauty of Bora Bora and the Four Seasons located on the island. So here are a few reasons why we believe Four Seasons Bora Bora is the best wedding destination in the world. 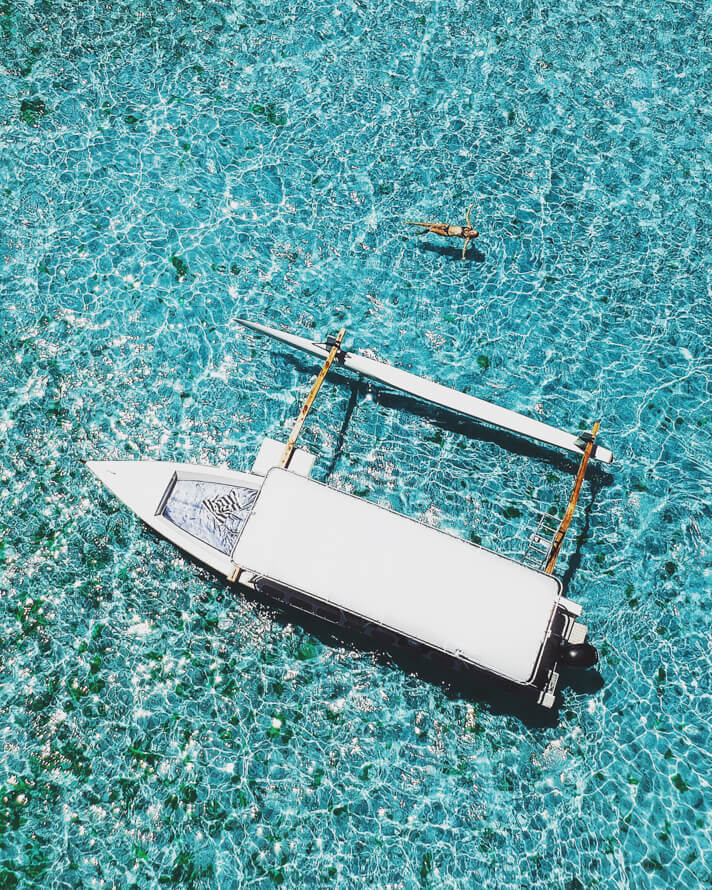 Aesthetically, there are few places in the world that rival the beauty of Bora Bora. We have been all over the world and have never seen colors like that of Bora Bora. Rather than ramble, we will let the pictures in this blog speak for themselves.

They said I was the first groom who ever asked to blow the conch shell and the first person to actually do it right on the first try. Guess being 1st chair 🎺 in junior high school helped out. The look on @alexandra_carson and the slow clap by the man who married us says it all. 📷: Damien @boraboraphotographer @fsborabora, thank you so much for the wedding of our dreams, the start to the honeymoon of our dreams, and your incredible hospitality. Hope to see you soon! #TheWildGallaghers

This was unlike anything we have ever seen at a wedding in the States. We had traditional dancers, musicians who wrote a song for us, and a series of traditional Tahitian sacraments we took part in during the ceremony. The ceremony was in both Tahitian and English, so we learned some Tahitian words as well.

Following the ceremony, we were boated back to the resort in a traditional Polynesian outrigger.

Overwater bungalows are like no hotel room anywhere in the world. Sure, there are more opulent rooms, but these bungalows are magical. Sure, other hotels on the island have them. But none have them sitting in the position of Four Seasons. We have boated around the entire island, and we can unabashedly state that they have the best location on the island. No other resort has water bungalows sitting in water that is this particular shade of blue, and no other resort has them positioned with such an incredible view of Bora Bora’s mountain. Being able to wake up and jump into this bright blue water directly from your bedroom is, by itself, worth the trip.

Still can’t believe that we got married on that tiny island out there!! We named it “Gallagher Island” and now I’ve had the theme song to Gilligans Island stuck in my head for over a week 😂🌴

Well, we named the island we got married on, so we refer to it as Gallagher Island. Fitting, no?

If you choose Four Seasons Bora Bora as your wedding destination, you can get married on a miniature island (they call it the Sunset Motu) that’s just offshore from the island the resort envelops. Yeah, an island within an island. Island-ception.

The island provides views of the surrounding islands as well as the gorgeous overwater bungalows of Four Seasons.

Shark bait 🦈 Spent the entire day yesterday swimming in the ocean with stingrays, fish, amazing coral, and these beauties. I’ve always loved the ocean but I had no clue I would enjoy swimming with sharks so much! Growing up in California you learn at a very young age to be terrified of all sharks (the great whites we have there are a tiny scarier than these black tips 🙈). Im so thankful I was given an opportunity to see them differently and spend some time with them in their home. Travel to me is all about new experiences with an open mind. 🙏🏻🌊✨

FS Bora Bora gives one the opportunity to partake in activities both on and off the property. On the property, guests can enjoy the beach, pool, basketball court, volleyball court, a ping pong table, gym, spa, and much more. Guests can also take out stand-up paddle boards and use snorkel gear for free and can rent jet skis and other aquatics gear.

FS also offers tours like the one we did with our new Polynesian friend, Timmy. We played with stingrays and swam with sharks and all kinds of fish before finishing our day eating a local lunch on a private island. Sincerely, this was one of our favorite activities we have done together while traveling. 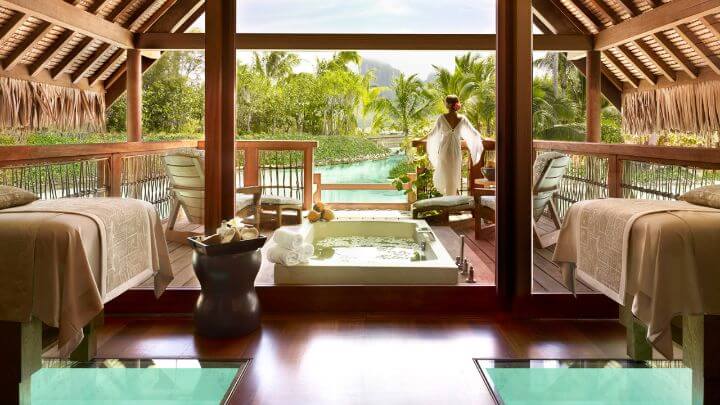 -The best spa experience of our lives-

Want to watch fish swim while you get the best massage of your life? Yes, those glass floors in the suite are like a fish tank to the ocean. Want to bathe while you look out at the ocean and the mountains of Bora Bora? Want to enjoy a heavenly body scrub that will leave your body feeling softer than a baby’s butt? Ok. Come to this spa. That simple. We took some images, but not any that do the spa suite as much justice as it deserves. As such, we chose to use the above image from the Four Seasons website. We were a bit preoccupied with getting pampered before our wedding. This particular spa treatment and suite was called the Kahaia Haven Suite.

First views of Bora Bora 😍 We took a red eye flight and woke up to these unreal vibrant blue waters. The last time I was in Tahiti I was 17 years old. It was my first trip out of the country without my parents and the trip that first made me fall in love with travel. I spent my entire time trying to learn as much as possible about the Tahitian culture, constantly fascinated with their traditions and way of life. Now I’m back, 12 years later, still the same but completely different. Everything has changed.. and I couldn’t be happier. ❤

FS Bora Bora (as well as every other FS property we have visited) has some magical way of making you feel like you’re at a private resort, even when the resort is full. Yes, you’ll see other guests in the public areas, but you’ll also often feel like you’re on your own private island.

We have written about this in length, but the Four Seasons needs its own category. It’s simply unfair to categorize Four Seasons and other 5-star resorts in the same bucket. 6 stars might suffice, but let’s be clear, Four Seasons is the gold standard for resorts. Top to bottom, head to toe, their resorts are perfection. The brand speaks for itself. They have the most beautiful properties in the world. They have the most hospitable and friendly staff in the industry (we literally leave every property with new friends, like our friends Timmy, Sophie, Claire, Thiery, Thibaut, Damien and Sadry from Bora Bora). Their chefs are some of the most talented on the globe – some Four Seasons restaurants (like Il Palagio in Florence) even have Michelin Stars. They also do an outstanding job of providing guests a cultural and local experience. Sure, the resorts are a bubble. You’re cut off from society when you’re on a Four Seasons property. That is one of the major reasons people choose to stay with Four Seasons. However, every property we have ever visited has done an exceptional job at providing careers for locals and creating experiences for guests that immerse us in the local culture. The resorts are often even created from local resources and filled with local art. There is simply no experience like the Four Seasons experience.

Read more about our experiences with Four Seasons on the travel blog. 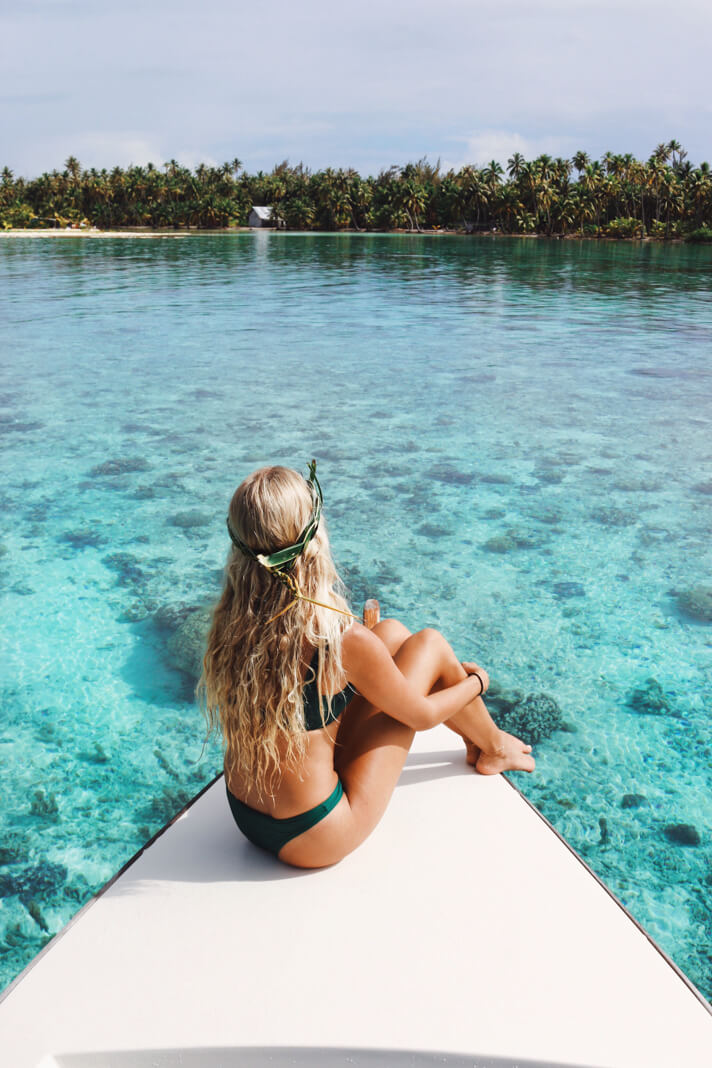 Those of us who live in So Cal are blessed when it comes to accessing the south Pacific. The flight to Tahiti is a simple 7.5 hours (generally overnight) and from Tahiti, one can reach Bora Bora on a short 45-minute prop plane. Once you arrive at the Bora Bora airport, Four Seasons staff will be there to greet you and then will transport you to the resort by boat. Gotta love a resort that is only accessible by boat! 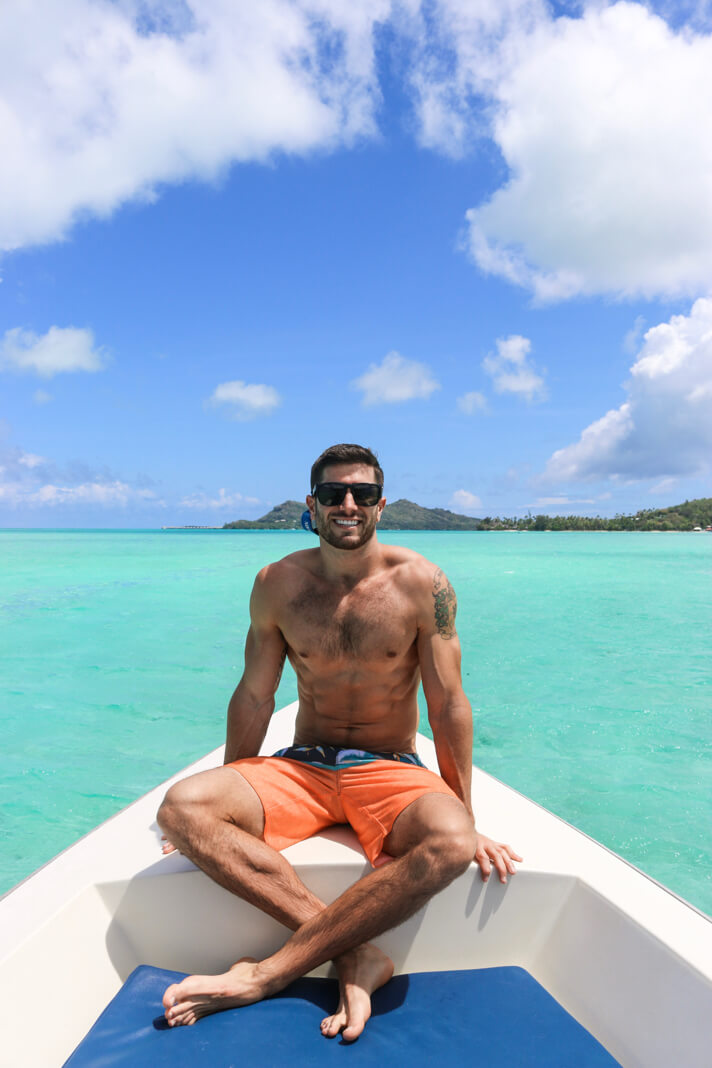 -No better place to start your honeymoon-

Four Seasons Bora Bora is also arguably the best honeymoon destination in the world. Stay tuned for a honeymoon blog soon to come!