10 Best Christmas Gifts for Travelers in 2018 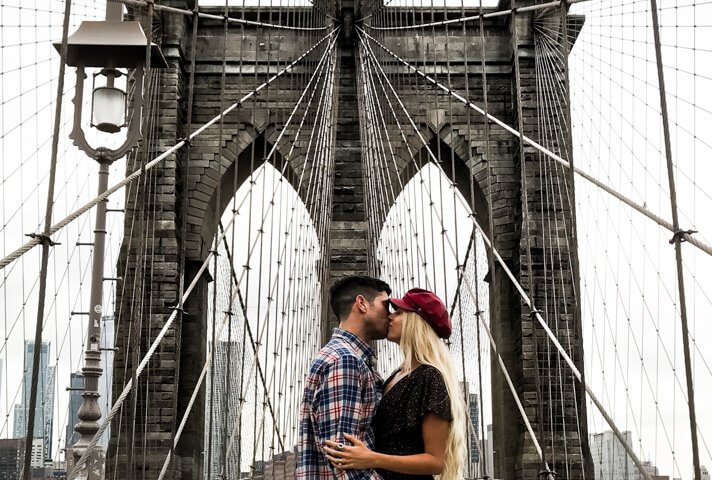 For those of you who have been with us from the inception of Couple’s Coordinates, you were with us for our engagement and our wedding, and now for our incredible life as husband and wife. This year we happened to spend our anniversary weekend in New York City as we were guests at the wedding of one of our good friends in New Jersey the day before. It was an awesome weekend for celebrating love and was a great way to spend our first anniversary. As you can probably expect, our anniversary night was filled with food and fun. Since we have never written a guide to New York City, we thought we would share our anniversary itinerary with you for your New York City date night. 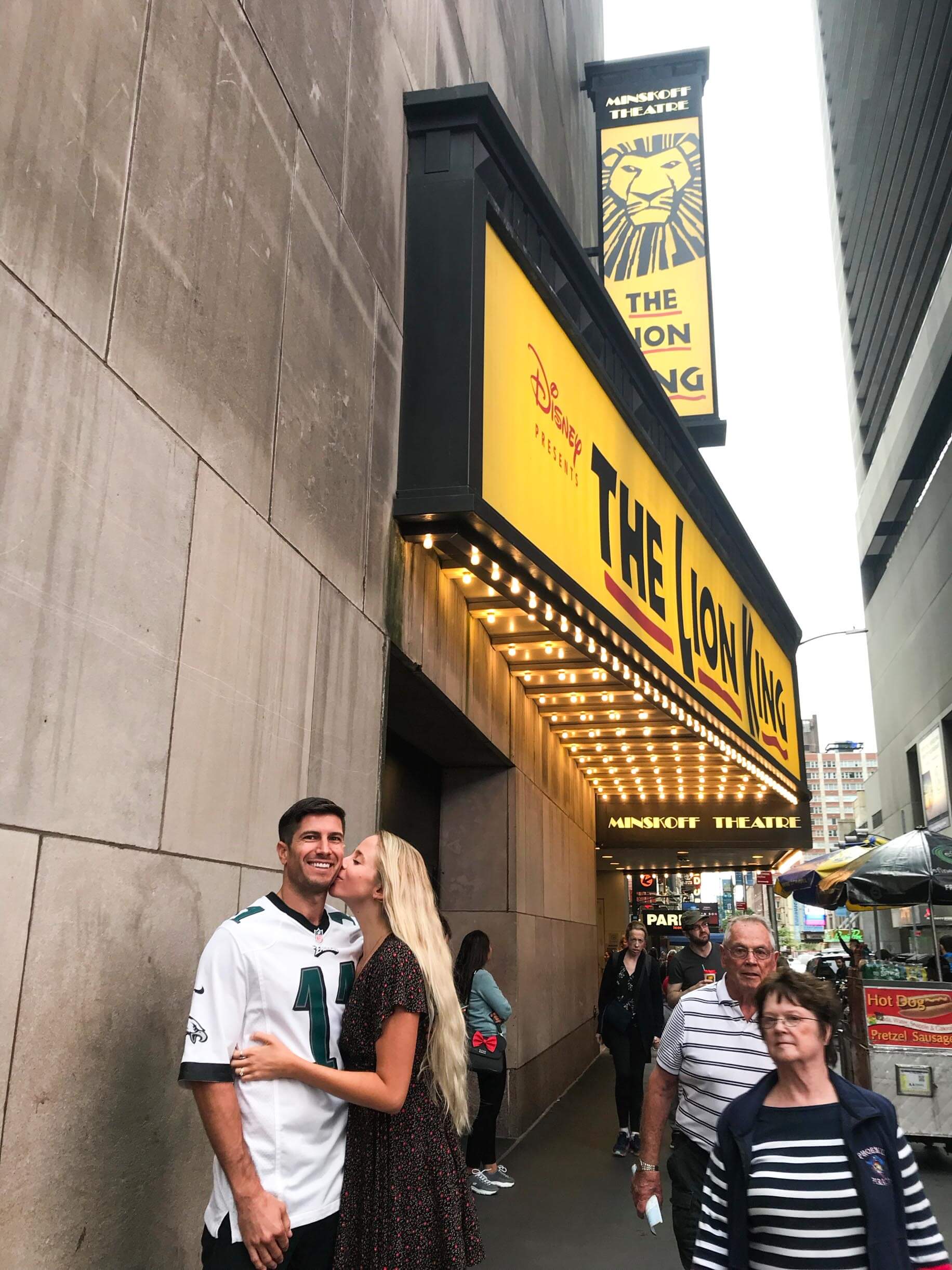 The Lion King on Broadway

We started our date night as more of a date day. The Lion King has 2 shows (a matinee show around 13:00 or 14:00 and an evening show around 19:00 or 20:00). We opted for the matinee show so that we could leave time to explore the city and eat dinner at a normal hour. The Lion King was one of the most incredible plays either of us have ever seen. The acting, dancing, and singing are all exceptional. For anyone who watched the Lion King as a kid, this will surely elicit feelings of nostalgia!

Take a Romantic Walk Around the City

When you look up and down the avenues, the city seems to go on forever. You’re sure to see buildings and brake lights as far as your eyes will allow. However, the island of Manhattan is quite small. The whole of Manhattan, the island that is home to the largest city in the United States, is a mere 23 square miles (about 60 square KM). One can walk from the Hudson to the East River at the widest point (near 14th Street) in about 40 minutes. The widest part of NYC is only 2.3 miles (3.7 KM). North and South, the island is only 13.4 miles in distance (about 21 KM). Traveling from Wall Street to the Bronx, you’ll want to take the subway or an Uber, but in most cases, you’ll be fine walking around the city.

We logged about 11 miles during our day in NYC, which happens to be about the average amount of miles/day we walk when traveling. Sure, some of the walking is specifically transportation with an intended destination, but some of the walking is also certainly aimless, romantic walking where we have the opportunity to talk and enjoy our time with one another. 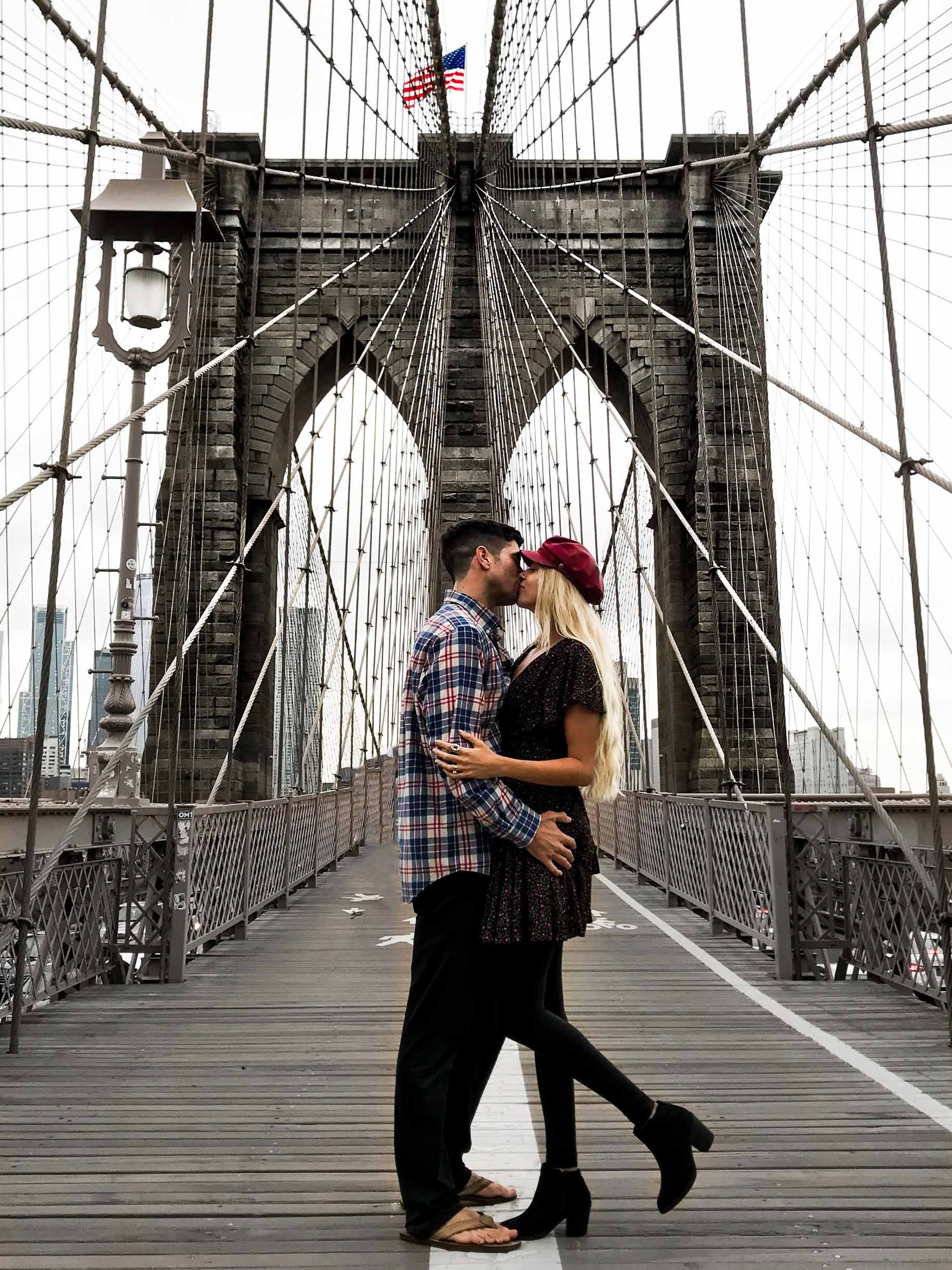 It can be argued that the Golden Gate, Sydney Harbor, and Tower Bridge of London are more “popular” than the Brooklyn Bridge, but none are more iconic. Since 1883, the Brooklyn Bridge has spanned the 5989 feet (almost 2 KM) from Manhattan to Brooklyn as the first ever steel-wire suspension bridge. The bridge also reaches a height of 277 feet. The Brooklyn Bridge is far from the longest or tallest bridge in the world – shit, it isn’t even the longest or tallest in New York City. It is, however the most historic, arguably the most beautiful, and certainly the most popular. Tourists flock from all over the world to run, bike, walk and drive (actually – more so, sit in traffic) over the bridge.

Walk over the bridge and enjoy the beautiful views over the East River. 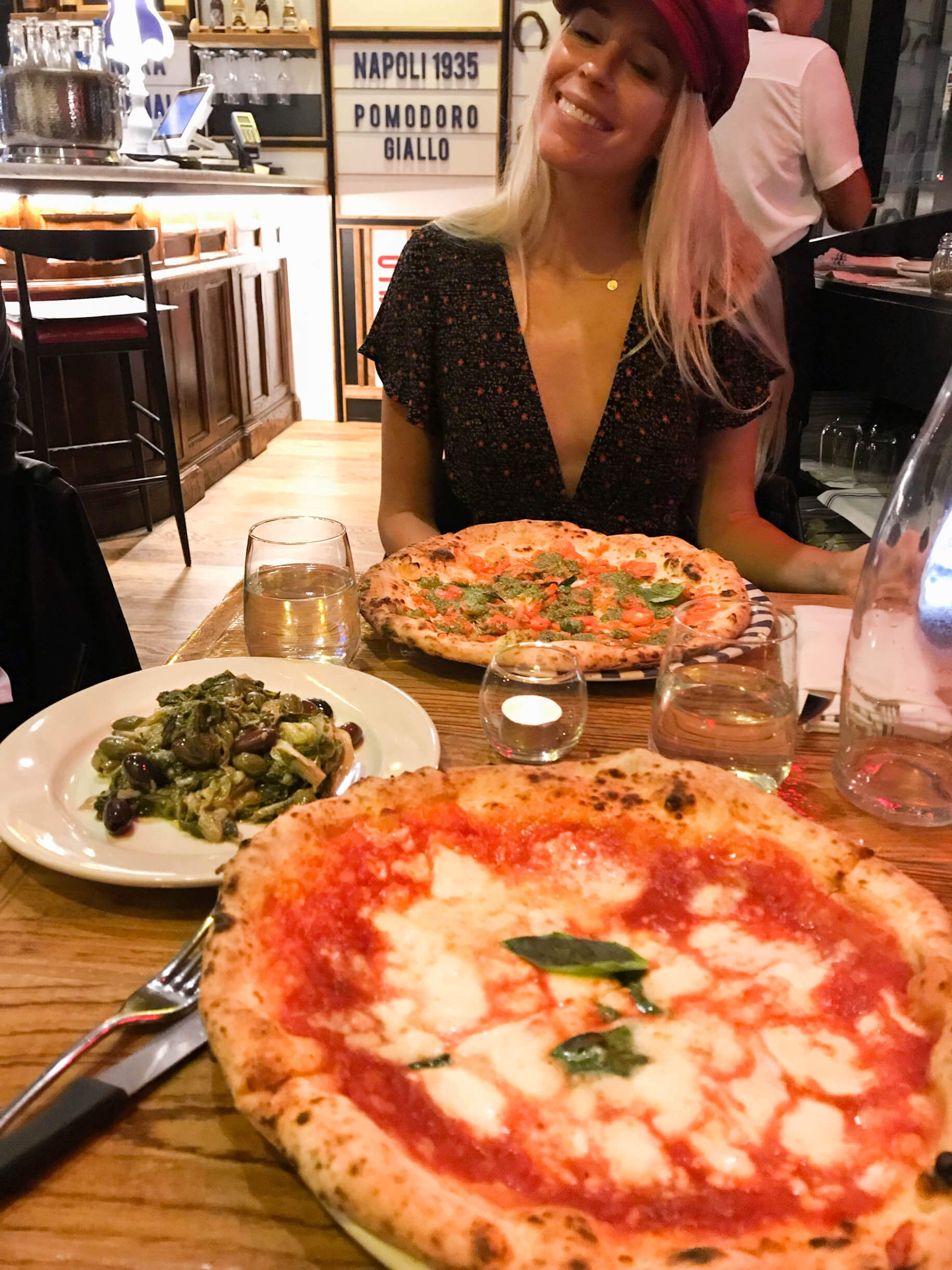 Fortunately for NYC, the gods of Napoli have blessed their city with a number of Italian immigrants who have established sister/satellite pizzerias. 2 of our 3 favorite pizzerias in Naples also have a sister restaurant in NYC:

Sorbillo (sister of Sorbillo – Naples, Milan, and Milan) and Don Antonio (sister of Starita in Naples) are our 2 favorite options in NYC. For our anniversary, we chose to have dinner at Sorbillo Pizzeria. Unbeknownst to us, the walk from our hotel to Sorbillo went right by our next stop.

On our way back from dinner we noticed a couple walking past us with Van Leeuwen ice cream cups. We knew we had to be close, so we checked on the map, and sure enough, we were right around the corner. Van Leeuwen is a great (albeit extremely overpriced) ice cream shop. Alex tries to avoid dairy and is actually quite intolerant, so vegan ice cream (made of coconut/cashew, etc.) is preferable for her. Typically, I’m opposed to vegan alternatives for ice cream, but Van Leeuwen is the one place that could trick me with a blind taste test. The taste and texture are pretty much identical to “real” ice cream. 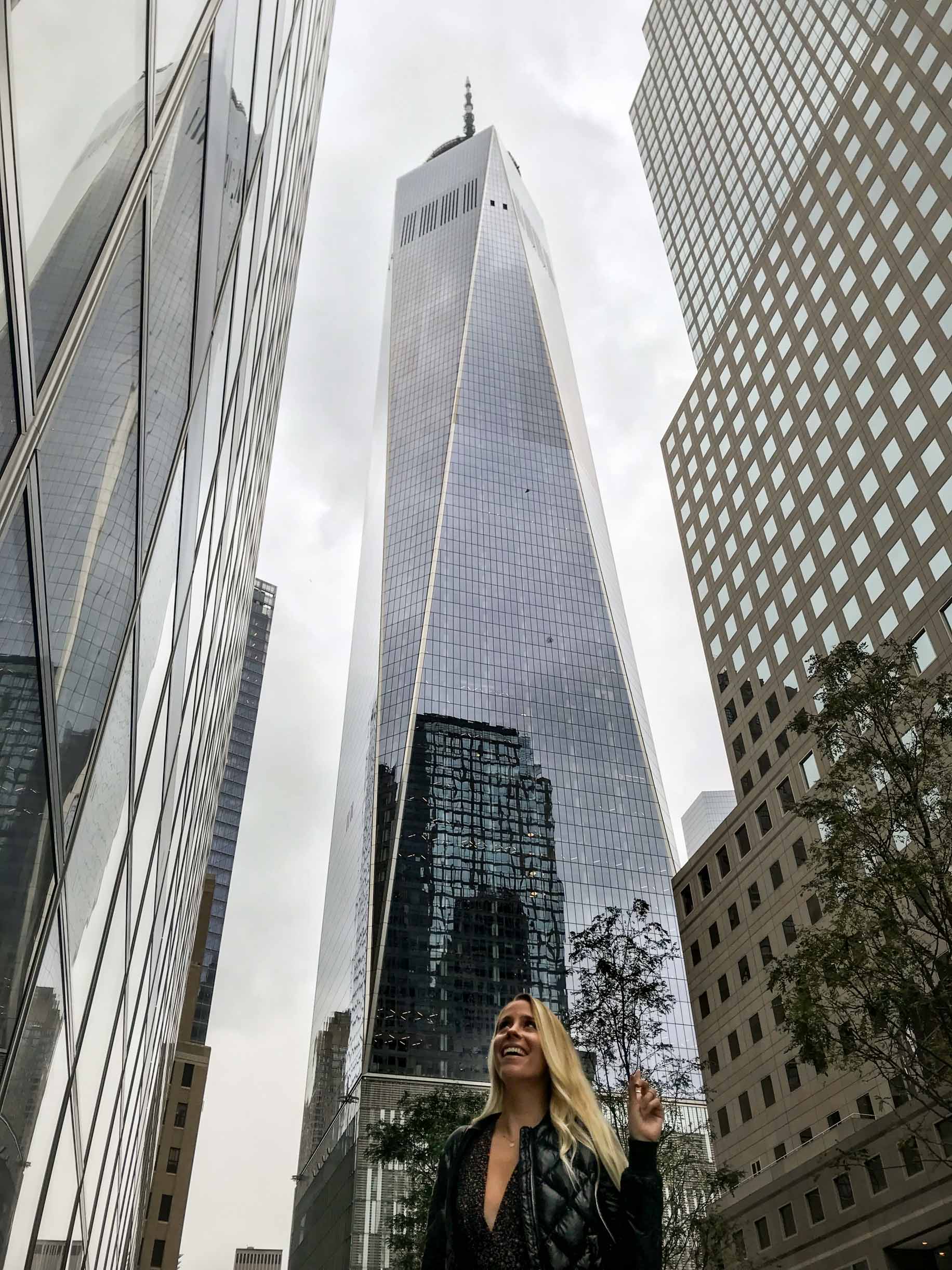 Other Things to do in New York City 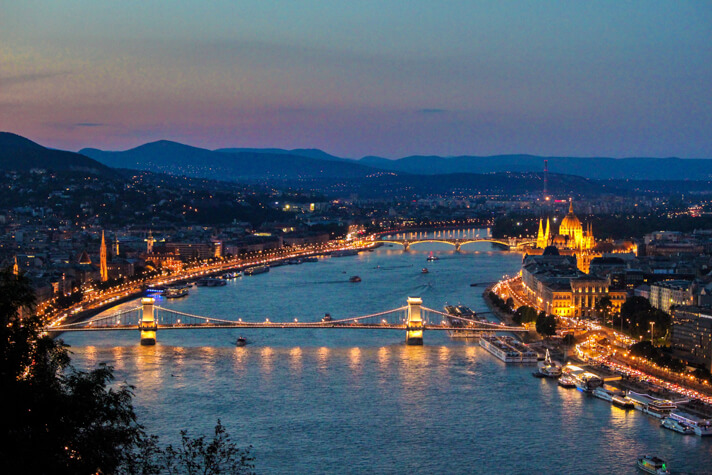