The Best Pizza in Naples 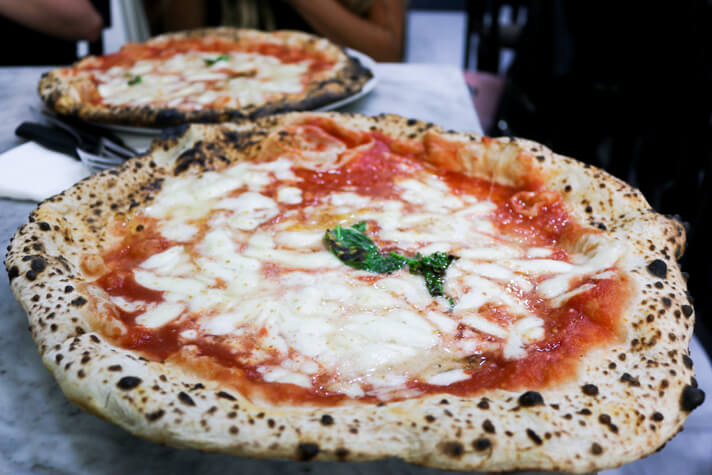 The Best Pizza in Naples…and the World!

Pizzeria Starita has been serving Naples some of the best pizza in the world since 1901. The options available at Starita are the most unique and delicious that we have found at any pizzeria in the world. The pizza Margherita (the true benchmark of a Neapolitan pizza) is out of this world. The variety and the unique combinations of the specialty pizzas are the best you’ll find anywhere in the world. The starters will make you salivate. The desserts are outrageous.

Starita is small and quaint. It is traditional. It is perfect. Starita: 1) has the most delicious and unique pizza in Naples (like really unique – think walnut sauce and zucchini flower unique), 2) has a vibrant and rich history, and 3) has perfected the benchmark pizza: the margherita.

Da Michele is the most popular and most historic of the pizzerias in Napoli. The pizzeria has remained under the ownership of the founding family since 1870. Over the last century and a half, the Condurro family has established themselves and Da Michele as pizza gods. Da Michele received a vote of confidence (and multiple hour-long waits) following its feature in the movie Eat, Pray, Love. At Da Michele, the pizza purist owners have ensured that you’ll only have the option to order 2 pizzas: margherita and marinara. Da Michele is simple. It is traditional. It is also perfect. If you’re looking for a traditional experience and the gold standard for pizza margherita, Da Michele is the place to go.

Da Michele now has a number of locations including the most recent establishment in Los Angeles!

Sorbillo has risen to international fame over recent years thanks to Gino’s desire to share his pizza with the world. Expanding his empire in Napoli and Milan, Gino recently opened a restaurant in New York City and has plans to open others in Los Angeles (Yay!!!! Please come soon!), Miami, and Tokyo.

It is funny to consider an 83-year-old business young, but next to Starita and Da Michele, Sorbillo is the new kid on the block (founded in 1935). Sorbillo might be our current favorite, but then again, it’s SO hard to choose.

One thing you’ll want to note is that each of the aforementioned pizzerias are considered to be among the most popular in Naples. This means that unless you arrive a few minutes before they open, you should expect a wait upon arrival. We waited over an hour for Da Michele and over 2 hours for Sorbillo. That’s just how it is. Waiting can be fun, however. The street culture in Naples is lively and there are bars, restaurants, etc. that surround the pizzerias. Grab a bottle of wine and enjoy people watching outside until your table is ready. Neapolitan pizza is cooked in a matter of 2 minutes, so you’ll be fed quite quickly after you’re seated.