The Best Resort in Las Vegas for Couples

How to Take Amazing Travel Photos as a Couple

10 Things to Do in Oregon 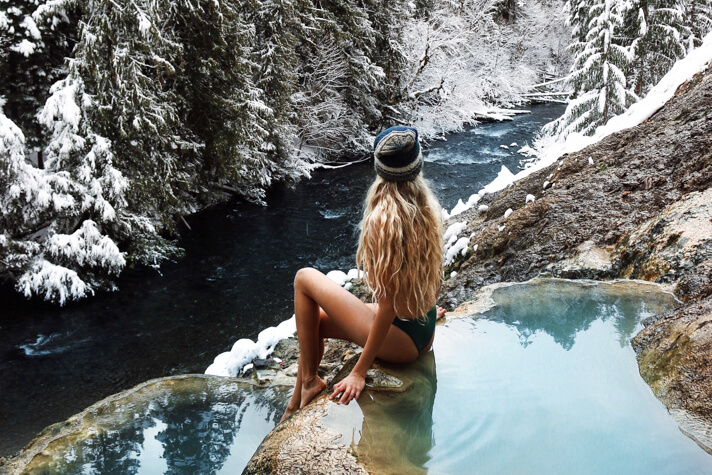 Oregon, for those of us from Southern California, is most commonly referred to when referencing college sports rivalries between USC or UCLA (Fight On!). However, there is much more to Oregon than a college football team that has never won a national championship. Oregon is one of the most naturally beautiful states in the US but is commonly overlooked by travelers; both foreign and domestic. According to Simple Most, Oregon ranks as the #18 most popular state in which to vacation. But for how beautiful, laid back, and unique Oregon is, it’s surprising that the state doesn’t see more tourism. For those of you unfamiliar with the beautiful west coast state, here are 10 things to do in Oregon:

Oregon is home to some beautiful waterfalls that you’ll enjoy swimming under during summer, and, well, probably just looking at during winter. The description above isn’t hyperbolic…we literally drove through a blizzard without snow tires (probably in 6 inches of snow) to get to these waterfalls.

Our time at Toketee Falls was like a freezing, winter wonderland. Our hike to the snow-covered basin was sprinkled with the last bit of snow from the abrupt and atypical February blizzard that Oregon experienced. The waterfall is one of the most unique and beautiful that we have ever seen. It isn’t nearly as tall or powerful as the waterfalls in Yosemite, but it is equally as beautiful.

Well, unfortunately for us, we drove a couple hours out of our way to Multnomah Falls (east of Portland) and, to our dismay, the falls were closed. Some asshole teenage kid had thrown a firework at the side of the mountain a couple weeks prior to our arrival and the parks and recreation service team had fenced off the area to mitigant a mudslide/landslide. We got an obstructed view of the gorgeous waterfall through chainlink and behind a crane and other construction equipment. Obviously, we saved our time and didn’t take photos. If you’re curious, Google has some beautiful images of the waterfall and the bridge that traverses it.

We are huge fans of places where we can be naked in hot water. Jacuzzis, oversized bathtubs at Four Seasons, and of course, hot springs in the middle of a forest. There are a number of natural hot springs throughout Oregon’s Umpqua National Forest as well as other areas of the states. We did our research, and found the best ones:

Of course, we made sure to wear bathing suits for the photos. If you’re opposed to nudity, be warned that there will most likely be naked people at these hot springs. If you’re like us and you think that people (especially here in America) have become unnecessarily prude and don’t understand what the big deal about a penis or some boobs are, then this place is for you. It isn’t weird, it isn’t uncomfortable, and it isn’t sexual. It’s just humans in our natural habitat in our natural birth outfits. Families frequent these hot springs as well, so don’t worry about bringing children. We saw naked adults, kids, and naked puppies. If you think it’s weird, it’s probably because our nation was founded by a bunch of prude puritans.

Cougar Hot Springs are one of the most popular hot springs, and if you’re not into Umpqua or Cougar, you can find a full list of Oregon’s hot springs on Soak Oregon.

Are you like us and you struggle to differentiate the difference between donuts and doughnuts? Well, Pip’s Original Doughnuts in Portland, Oregon chose to forego the shortened version of donuts that we commonly use and also chose to forego making full sized doughnuts. They serve plates of miniature doughnuts (bit sized for Michael and a few bites for Alex) and offer guests the opportunity to cover them in various toppings (hot chocolate sauce, honey, cinnamon, etc.). Dress warm because you might have to wait in the cold for a while. The restaurant isn’t quite as small as the doughnuts, but it certainly isn’t huge.

Many of the hot springs and waterfalls require a small hike, but Oregon has a system of hiking trails that rivals the body’s circulatory system. Check out the best hikes in Oregon for more information.

Ok, maybe not the Ducks. But we’d be lying if we didn’t admit that Autzen Stadium looks like an incredible place to watch a football game. Oregonians are passionate about their Oregon Ducks (the mascot and representative sports teams of the Universtiy of Oregon). Admitedly, Oregon has some of the best sports programs in the nation and certainly is always a contender to win the Pac 12. Aside from the Oregon Ducks in Eugene, Oregon, you’ll find a number of professional sports teams in Portland. Portland is home to the Portland Blazers (NBA), Portland Timbers (MLS), and Portland Thorns FC (National Women’s Soccer League).

Maybe even toke up at Toketee Falls? Who knows. Recreational marijuana – Oregon is also discussing the possiblity of legalizing mushrooms (link) – i think its safe to say oregon is like our amsterdam in the US – in 1973, Oregon became the first state to decriminalize marijuana. in 1998 it became medically available and in 2014 Oregon became one of the first states to legalize recreational marijuana. So toke up, or have a brownie…responsibly of course.

I (Michael) visited Crater Lake as a child, but due to our time constraints, we were unfortunately not able to make it together on this trip. Crater Lake is likely the most popular tourist attraction in Oregon and for good reasons.

The lake is frequented by over 500,000 travelers each year. The surface elevation of this gorgeous lake is 6178 feet tall above the piercing blue water.

Most interesting about the lake is that the lake was formerly a 12,000-foot tall volcano that erupted and collapsed into itself 7,700 years ago. The lake formed as the caldera filled with water over the last 7,700 years.

Mount Hood is considered a technical hike but is neither Everest nor Kilimanjaro. The elevation of the summit is lower than the town of Cuzco, Peru and sits at only 11,250 feet. Regardless, it is the highest point in Oregon and the 4th highest point in the Cascade Range.

Oregon has approximately 362 miles of coastline (much of which resembles the likes of Big Sur, California). There are gorgeous beaches littered along the coast such as Cannon Beach, Pacific City, Neskowin, Oceanside, Hug Point, Harris Beach, Devil’s Punch Bowl, Samuel H. Boardman, etc. Many of these beaches are devoid of tourists and absolutely breathtaking.

If the weather is right and the snow has been good, Oregon’s Timberline Lodge and Ski area might be a great destination for your trip. Oregon has many beautiful ski resorts that are worth checking out. Sure they’re not Vail, Aspen, or Park City, but they certainly get the job done (especially for those of us from Southern California who are used to snowboarding in 60-degree weather at Bear Mountain). Check out Mt. Hood, Mt. Bachelor, Mt. Hood Skibowl, Hoodoo Ski Area, Mt. Ashland Ski Area, Ski Anthony Lakes, Willamette Pass, and others.

Story Behind Our Trip To Oregon

For those of you who are still with us, here is a funny anecdote about our trip for you to enjoy. Hopefully, you’ll laugh at our despair like we finally learned to.

Back in February 2018, we embarked upon the longest road trip of our relationship. We (read I – Michael…Alex was copilot) drove from Los Angeles to Seattle and back. Along the way, we spent a few nights exploring the beautiful state of Oregon. We had the chance to visit waterfalls, skinny dip in hot springs, eat delicious donuts in Portland, and relax at a luxury hotel for one night to make up for the shitty place we stayed at the first 2 nights.

The trip was exhausting. From Los Angeles, we drove 13 hours straight to Eugene. We had traffic, rain, and other impediments but managed to make it just fine. We arrived well after midnight, but due to our tight schedule, we woke just 4 hours later to explore the aforementioned waterfalls.

From Eugene, Toketee Falls is about a 2.5 hour drive. Add snow and no snow chains and that drive becomes a futile endeavor. We woke before the sun, drove through the snow, and finally got to a point near the mountain road through Umpqua National Forest where we knew it was unsafe to continue.

We tried to buy chains in a sleepy little town, but nothing would have been opened for another 3 or 4 hours. As such, we decided to head back to the hotel, rest, and explore areas less impacted by the snow later that day. Round trip, we had driven for about another 5 hours.

Long story short, we rested and then went to explore Portland and the surrounding areas. Well, that didn’t go as planned either. As mentioned, Multnomah Falls was closed, as were many of the surrounding roads and hikes. Our day was literally spent in a car driving between various sites we couldn’t see.

In total, we drove the 13 hours from LA to Eugene, slept for about 4 hours, and then drove another 8-9 hours the next day. So, on 4 hours sleep, we essentially drove for a whole day. We were frustrated, exhausted, and disappointed. But hey, what can you do when an unexpected blizzard slams the entire Pacific northwest? We laughed, ate warm food, and created some incredible memories.

Fortunately, the snow made for some of the most magical photos we have ever taken. We finally made it to the hot springs and waterfall the next day and were in a winter wonderland. All in all, it was an incredible trip. If you’re traveling to Oregon or Washington in winter, be sure to have chains. We had checked the weather before we started our road trip but the storm came out of nowhere so we were caught with our pants around our ankles.

Oh, and yes…after all of this, we drove the additional 5+ hours to Seattle (through a blizzard – it literally snowed the entire way) and then the 17-18 hours back from Seattle to LA. In a period of 4 days, we drove something like 45 hours. That was our last “long road trip.” In the future, we will aim to keep our driving days under 6 hours haha.