7 of the Best Restaurants in Sydney

Plitvice vs Krka: Which Croatian National Park Should You Visit? 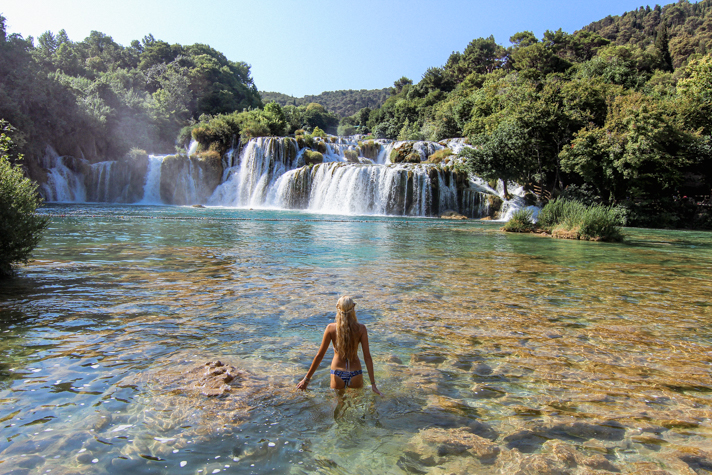 Croatia is widely known for the castle walls of Dubrovnik (the home of King’s Landing in Game of Thrones), Hvar (the party island), and Split (the party city). Less traveled destinations are the national parks of Plitvice and Krka. Plitvice Lakes National Park and Krka National Park are easily 2 of the most gorgeous national parks we have ever visited. We were fortunate enough to spend a week in Croatia, so we didn’t have to have the mental battle of Plitvice vs Krka. Instead, we chose both. But, assuming you’re short on time, we have recommendations to help you choose!

This place is literally fucking Pandora. You know…the planet from the movie Avatar? Yes. That’s Plitvice Lakes. Across the park 16 cascading lakes are complemented by almost 100 waterfalls! Everywhere you look is a natural wonder. Visitors can hike around for an entire day and still need more time to explore. There are rowboats you can hire to row around some of the lakes, and a number of hiking trails worthy of an expedition. The only downside is that you can’t really swim at Plitvice. Plitvice is located in the north of Croatia near the Bosnian border in the east.

Located in central Croatia not far from Split and Sibenik, Krka boasts 7 magnificent waterfalls, over 850 different types of plants, and 200+ species fo birds and fish. While the park occupies only half the amount of land of Plitvice, the expansive series of lakes is one of the most breathtaking sites on earth. Stop by the Island of Visovac and enjoy swimming under Skradinski Buk and Roški Slap in the Krka River.

Plitvice vs Krka: Which is most beautiful?

Beauty is in the eye of the beholder, but we were certainly left more speechless at Plitvice. It is grandiose and magnificent. It’s simply breathtaking. Plitvice is a UNESCO World Heritage site and occupies about 300 square kilometers. During the winter many of the falls freeze, creating a winter wonderland that is hard to do justice with words. If you’re purely concerned with aesthetic beauty, choose Plitvice!

Plitvice vs Krka: Which is more crowded?

Croatia has literally had to limit tourism to Krka after an influx in tourism over the last few years. The park has gained far too much notoriety through Instagram to be able to scale to meet the demand of travelers.

While Plitvice can certainly still be crowded during high season, the national park has twice the amount of land as Krka and receives significantly fewer visitors each year. If you want to avoid the crowds, choose Plitvice!

Plitvice vs Krka: Which is best for swimming?

Swimming is strictly forbidden in Plitvice Lakes which can be quite a bummer in the hot, humid Croatian summer. Hiking around all day, sweating, and baking in the sun made it almost impossible to not jump in the water. We debated breaking the rules and jumping in on so many occasions, but decided to play it straight.

Krka is AWESOME for swimming. While it isn’t technically allowed, many people jump off the waterfalls as well! If you’re looking for a great day swimming, definitely choose Krka!

Plitvice vs Krka: Which is best for hiking?

Hiking Plitvice National Park is a once in a lifetime experience that we think everyone should have. The hiking in Krka pales in comparison to Plitvice. Through Krka, we mostly walked on walking paths and sailed around on a boat. In Plitvice, we put some MILES on our hiking boots. Best for hiking? Definitely Plitvice!

Making a day trip out of your time in Plitvice is less feasible. The park is quite a bit more remote and with twice the acreage, you need a couple of days to explore. You can stay just outside the park and drive in each day! 2 days is probably sufficient. We, unfortunately, only had 1 day to explore Plitvice, but we still needed to stay near the park to maximize our time. Plitvice definitely makes a better weekend trip.

From Split or Sibenik, Krka is quite easy to reach, making it a wonderful choice for a day trip. You definitely should allocate a full day to visit the park, but you really don’t need more than 1 day in Krka. Krka is the easy victor if you’re looking for a great day trip!

Plitvice vs Krka: Which should you visit?

Both! Of course, the simple answer where neither time nor money are variables. But truly, if you have a week to spend in Croatia, we certainly recommend you save yourself a life of regret and visit both! Don’t waste time in Split when you could be chasing waterfalls.

4 days should be enough time to allocate between both Plitvice and Krka, but plan to visit Croatia for at least a week so that you can explore Dubrovnik and other awesome towns throughout the country.