How to Get to Lake Como 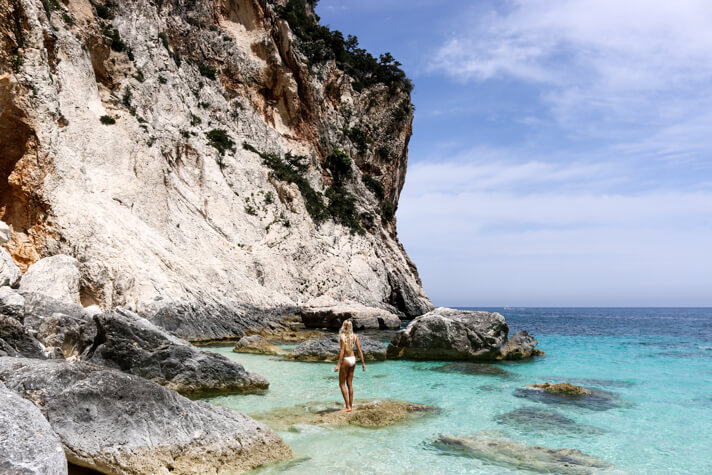 Sardegna (Sardinia to our fellow English speakers) is an island that sits just west of the toe of the Italian boot. Many think of Sardegna as just another Mediterranean island, and subsequently, as a small island that is easily navigated. Well, part of this is true and part of it is completely false. Sardegna is easily navigable. The roads are well maintained, have very little traffic, and provide a stress-free driving environment. There also are not many major roads, making it difficult to get lost. Boating around it is also easy (just make a bunch of left turns and you’ll eventually make it around). But Sardegna is actually quite large. When visiting Sardegna it is imperative to rent a car or have access to a car in some capacity. There are simply too many beautiful beaches spread across too many square kilometers of island to do your trip justice without a car. To be able to see many of the most beautiful beaches in Sardegna, you’ll need multiple forms of transportation: a car/Vespa and a boat. 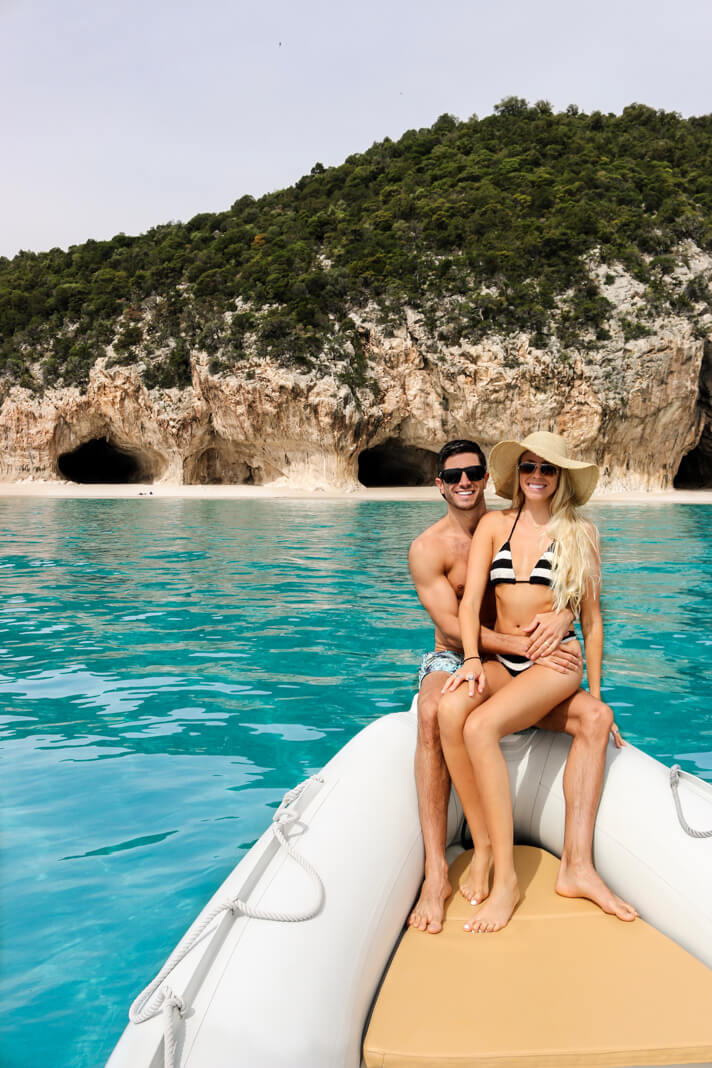 During our time in Sardegna, we had a car. We were able to travel from the north to the east, and finally to the south. Unfortunately, we didn’t have time for the west coast, which is a true travesty because we have heard some of the least crowded and most beautiful beaches are on the west coast. Oh well, next time!

If you plan to visit the north or west coast of Sardegna, please consult other travel guides after reading our tips here. We spent the majority of our time on the east coast and the remainder of our time in the south. Our recommendations for the east coast are much more detailed than those for the other areas of the island. 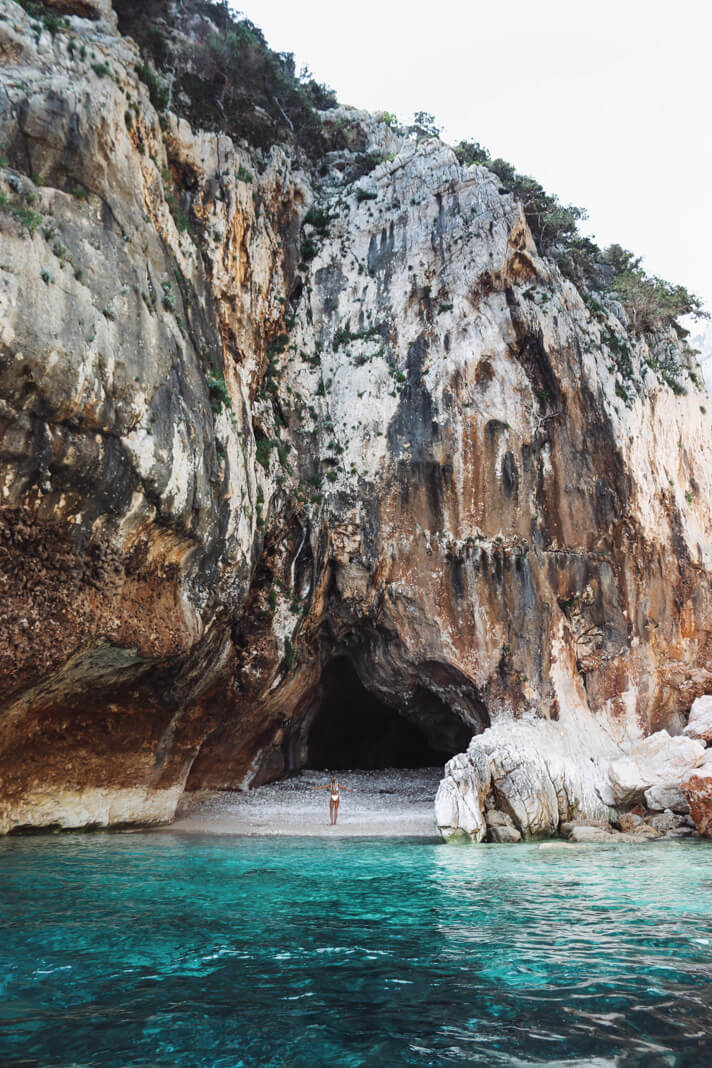 Arriving in Sardegna + Our Plan

If you want to see as much of the island as possible, we suggest you follow the travel plan that we created. After loads of research, we chose to fly into Olbia and fly out of Cagliari. This meant that we had the opportunity to explore the entire island without having to return to Olbia for our departure. Many of the car rental companies allow for you to rent a car in either Olbia or Cagliari and then drop the vehicle off at the opposite branch (there is a small fee).

Sardegna is one of the few places in Italy where it is imperative to rent a car. The island is actually fairly large, so seeing the whole thing (or even a decent portion) requires a car. It is completely feasible to get from the north to the south without a car as the trains run directly from Olbia to Cagliari. However, considering the remote beaches, small villages without access to trains, and overall mountainous topography of many areas of Sardegna, renting a car is a must.

After renting a car at the Olbia airport, we spent the next few days road tripping across the beautiful island of Sardegna, exploring as many beaches as we could find.

Kayak has a pretty good selection of car rental companies. We used Dollar, which is a subsidiary of Hertz. 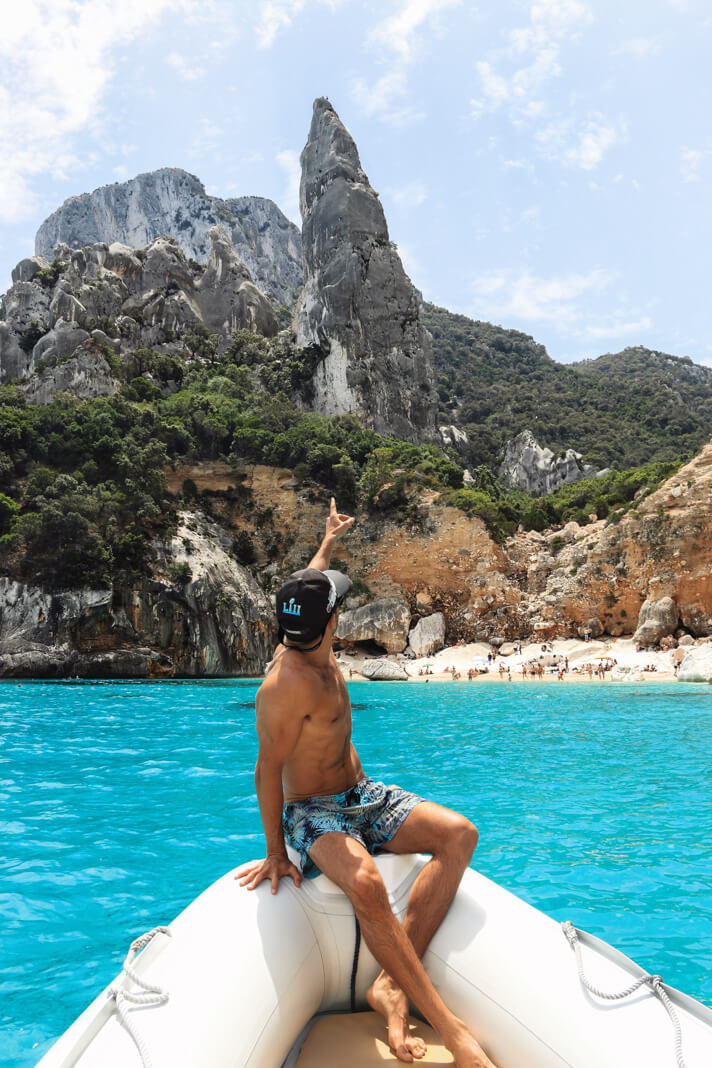 We encountered the most beautiful beaches on Sardegna while we were on the east coast.

From Cala Gonone (the town where our hotel was) you can hire a private rubber boat (barca a gomma) with a skipper (marinaio) for the day for about €130+ gas. If you have experience driving a boat and don’t want a skipper, you can take the boat yourself for €80 + gas. A boat is THE ONLY WAY TO SEE THE BEACHES IN SARDEGNA. Let us reiterate. The beaches along the east cost are NOT ABLE TO BE REACHED WITH A CAR. The company we used to rent the boat is called Cielomar, but any of the competing agencies are likely fine as well.

The most beautiful beaches on the east coast can be found between Cala Gonone and Cala Goloritze (south of Cala Gonone). In total the boat ride from Gonone to Goloritze is about an hour, but you’ll need the entire day to explore the beaches, caves, and crystal clear blue water.

The beaches along the east are both unique and jaw-dropping as a benefit of the mountainous topography that lines the east coast. The cliffs reach 500 meters (over 1500 feet) in some areas. Capturing pictures from the water all the way up to the top of the cliff is a challenge without a wide angle lens.

If you list to us and take a boat tour from Cala Gonone to Cala Goloritze, you can see some or all of the following beaches and caves:

If you’re wondering what cala and/or spiaggia mean, they mean cove and beach, respectively. Spiaggia is the general Italian term for “beach,” while cala is the nomenclature used for many of the beaches in Sardegna as many are more so coves than actual beaches. The coves on this stretch of the east coast are inaccessible by car and some don’t have much of a stretch of sand. Hence, cove, or cala. 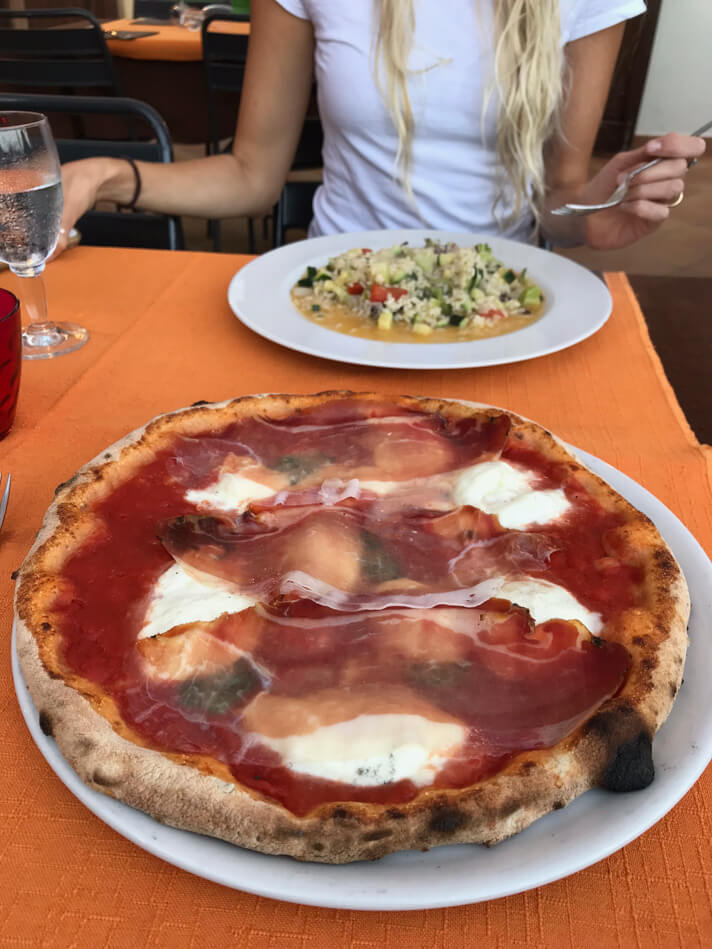 La Poltrona starts guests with a delicious bread basket with assortments ranging from standard Italian bread to the more local Pane Carasau (Sardegna flatbread). The restaurant has a wood fire oven that makes some of the best pizza in Sardinia and chefs that make some delicious handmade pasta. The portions are large while the prices are quite reasonable. They also have vegan options. Alex ordered a quasi-off-the-menu dish that was essentially a vegan risotto filled with vegetables. They have local fish and meat options as well and offer a delicious selection of homemade desserts. You can’t go to Sardegna and not try their famous dessert, seada. The seada (pictured below) at La Poltrona is one of the best combinations of sweet and savory flavors we have ever had. Your mouth with thank you. 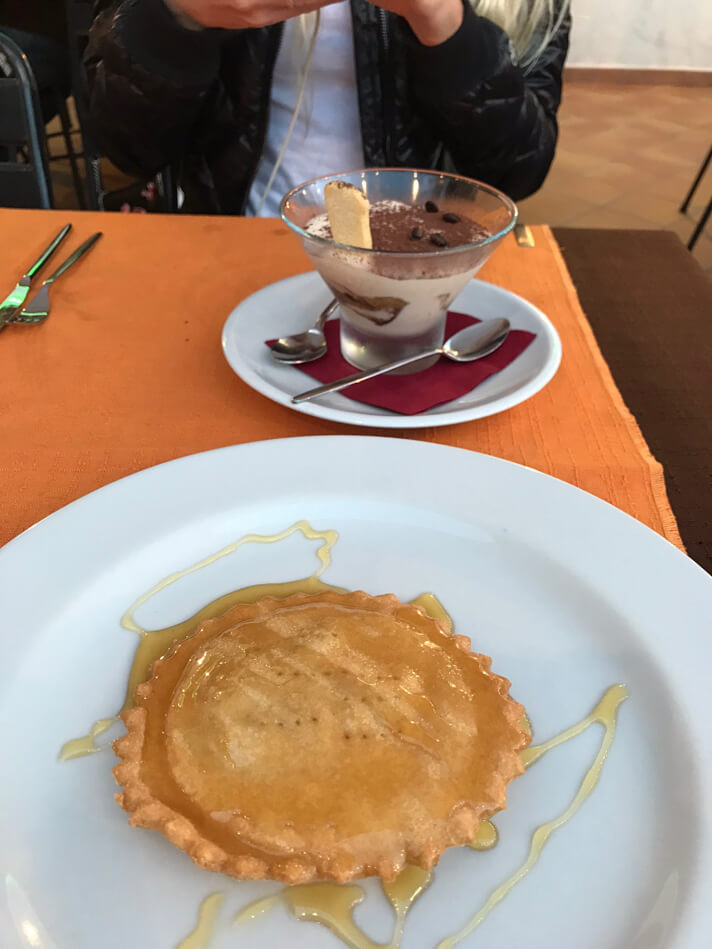 Gelateria Fancello serves homemade gelato to locals and tourists alike and conveniently sits just opposite the beach in Cala Gonone. Is there anything better than a gelato on the beach? NO. The answer is no.

We had a number of people tell us that some of the most beautiful and most secluded beaches can be found on the west coast of Sardegna. We wanted to visit the west coast so badly but fate other other plans. Unfortunately, two things occurred that caused us to not visit the beaches on the west coast. First, we got a flat tire on our first day and were driving around the island on a spare tire at a maximum speed of 80 KM. Imagine driving on a freeway for hundreds of KM at a max speed of 80KM. People were literally zooming by us at double our speed.

The flat occurred no more than 2 hours after our arrival and our only solution was for me (Michael) to change the tire to the spare. Small businesses (like a body shop or mechanic) are generally closed on Sunday and Monday in Italy. Considering we arrived in Sardegna on a Saturday evening, there was no chance for us to change the tire until at least Tuesday morning.

The second variable that caused us to miss the west coast was the weather. During our first 2 days in Sardegna, our weather was beautiful. It was hot but not too hot. It was humid, but not too humid. And it was generally sunny, only overshadowed by clouds during a couple parts of the day. However, during our next 2 days, Sardegna looked like it was about to receive a year’s worth of rain. We went to Sardegna specifically to enjoy the beautiful beaches and sunshine. We wanted to find private coves and tan nude, but now it looked like we were going to have to spend the rest of the trip in raincoats.

Rather than sitting in the rain, we checked the weather in various spots around the island and finally settled on the only sunny spot on the island – the south.

Regardless, here are some of the beaches we had hoped to visit on Sardegna’s west coast:

In the south, steer clear of Cagliari and head toward Chia beach. The beaches in the south are cliche Sardegna: white sand and water as blue as Alex’s eyes.

Cagliari, to us, was Naples with less culture and history. The people were wonderfully friendly, but the city itself seems to be longing for an identity that has outdistanced the city. We found it to be similar to Naples – without the rich culture and  best pizza in the world. This doesn’t mean you shouldn’t visit the south, it just means you ought to visit the beaches.

Aside from Chia, you’ll also want to visit Costa Rei, which is technical both south and east. The beaches lining Costa Rei are some of the most popular and most gorgeous on the island.

Beaches to see in the south:

Our only time in the north was spent at the airport in Olbia. Unfortunately, our time constraints (and later tire issue) meant that we couldn’t visit the beaches in the north. We had, however, done a load of research, and had wanted to visit the following beaches:

Hopefully what you’re beginning to see is that there is no shortage of white sand and blue water. Sardegna is completely encompassed by beautiful beaches and is one of the most naturally beautiful islands we have ever seen. Again, please consult other travel guides if you plan to visit the north or west areas of Sardegna. 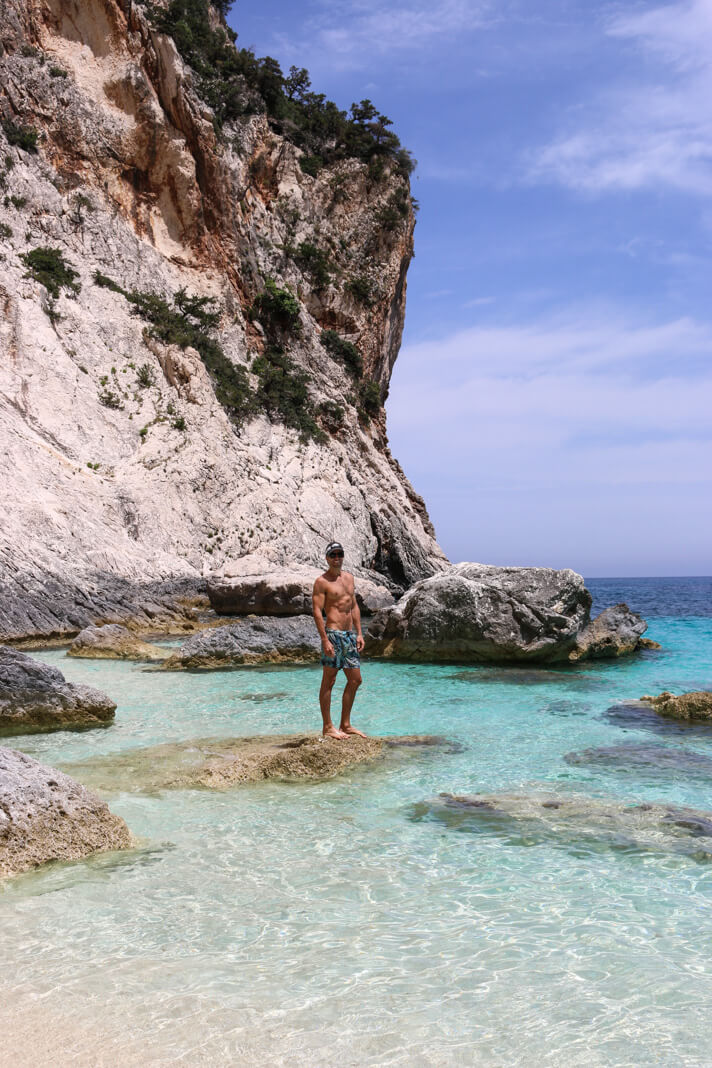