How to Plan a Day Trip to San Marino 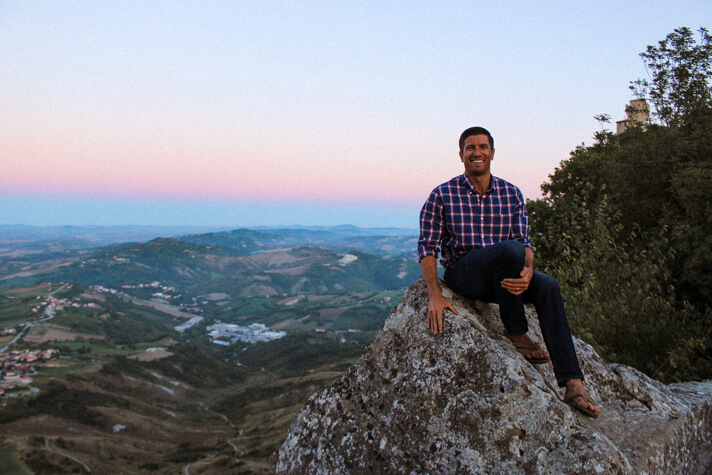 A few years ago, we discovered the tiny country of San Marino while playing around with Google Maps in preparation for our upcoming trip to Italy. We noticed San Marino in bold letters with a thick border surrounding the tiny principality and recognized that, similar to Vatican City, this country is like an island, surrounded by Italy on all sides. The country is essentially an Italian tax haven – citizens reap the benefits of protection from the Italian government, yet circumvent the 22% VAT tax that you’ll find in Italy.

San Marino is a cute little castle country that has gorgeous panoramic views – the Adriatic Sea on one side and the rolling countryside on the other. There isn’t, however, much to do or many good restaurants at which to eat. We spent 1 night here, but our recommendation to you is that you plan a day trip to San Marino from Florence, Rimini, Bologna, or one of the other northern-central towns of Italy.

How to get to San Marino

Most of us leverage the Italian train system while traveling in Italy, but this is not the easiest option for getting to San Marino. There is no train that runs directly into the country, so you’ll have to travel via Rimini if you want to leverage public transportation. Our recommendation is that you drive.

From Florence SMN, you’ll take a train to Rimini and then a bus from Rimini. This is the cheapest and easiest way to arrive by public transportation.

There’s something special about crossing international borders in a car. This one is simple…similar to crossing state lines in the US. You drive over the border, maybe make some weird cheering noise with your co-pilots, and then you’re in a new country.

Driving from Florence to San Marino requires about 3 hours and the route goes via Bologna. Bologna has some of the best food in all of Italy – and San Marino does not – so, we recommend that you leave Florence in the morning, have lunch in Bologna, continue on to San Marino for a day trip. Once you have explored the castles and taken in the views of San Marino, drive back and have dinner in Bologna or Florence.

Driving from Rimini takes right around 30 minutes! This is the easiest option if you’re already on the Adriatic Coast in Rimini.

Near the Old Town, you’ll find a number of public parking lots. Our hotel included this in the cost, but if yours does not, you can simply pay to park.

Things to do in San Marino

We explored almost the entire country in about 45 minutes flat. There’s honestly not much to do here other than walk around the small old town, explore the castles and towers, visit the cathedral, and take in the breathtaking panoramic view. As such, it’s a country you can easily cross off your bucket list with a few hour pit stop.

If you plan to explore each of the museums, you might need a full day, but if you’re only keen to visit the castles/towers and enjoy the panoramic views, a few hours would suffice.